Certified by UL and CE

Safe to use – no side effects, painless

Decreased use of analgesics

Human physiology is the study of the function of our organs, the cells they are composed of, and the interaction of mechanical, physical and biochemical effects; which collectively determine the health of the individual. Studies have shown that many painful conditions can be treated with LED Photo Light Therapy to reduce pain and accelerate the healing cascade. NASA established the research and development of this technology and its biological application. Photo Light Therapy is the utilization of energy produced by certain light sources at a specific frequency and concentration to produce a desired physiological or chemical result.  Sources of this energy can be transmitted through Light Emitting Diodes (“LED”), Lasers, Cold Lasers and more.

LED devices can be adjusted to various frequencies. Research has determined that the most effective frequencies for 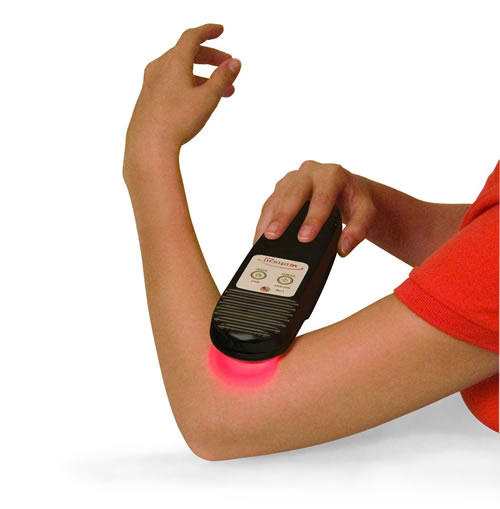 beneficial medical applications reside within the red and near-infrared wavelengths, between 600 and 900 nanometers. Some specific frequencies have been shown to duplicate the useful frequencies of sunlight, which can stimulate normal, dysfunctional and damaged tissue. Many clinical studies involving photo light therapy, near-infrared light and laser technology have demonstrated significant and promising effects on animal cells and tissue. These effects have been studied and published for the last four decades in the U.S., Europe and Asia (see studies).

Use the power of LED’s (near-infrared light emitting diodes)
to provide the temporary relief of minor aches and pains related to:

Photons (LED Technology)
Photons are a quantum of visible light or other form of electromagnetic radiation demonstrating both wave and particle properties. A photon is light carried over space, without mass or an electrical charge, but has energy and momentum. Photons hit photoreceptor molecules in mitochondria of our cells-which takes in nutrients, breaks them down, and creates energy rich molecules-triggering a photochemical reaction.  The more elevated the number of photons create more chemical reactions, but are limited by saturation (the capacity to absorb photons effectively).  The newly energized mitochondria accelerate the absorption and utilization of nutrients.

Mitochondria (In Our Cells)
Mitochondria, sometimes described as “cellular power plants”, generate most of the cell’s supply of adenosine triphosphate (ATP) and are the most significant source of chemical energy for most cells. The ATP oxidizes the mitochondria, which is part of the natural process for the electron transport chain in the Krebs cycle. Mitochondria are also involved in a range of other processes, such as signaling, cellular differentiation, cell death, as well as the control of the cell cycle and cell growth.

Fibroblasts (In our Tissues)
Fibroblasts are the most common cells of connective tissue in animals. They synthesize the extracellular matrix and collagen, essential protein required to repair damaged tissue by replacing it with new tissue. Mitochondria in fibroblasts play the critical role in wound healing. Energized to an activated state of metabolism, these cells accelerate the natural healing or replacement of the affected tissues.

Non-Invasive Anti-Inflammation and Analgesic (Anti-Pain)
Often injuries are followed by inflammation of tissues accompanied by pain. Near infrared light therapy causes dilatation of blood vessels and activates the lymphatic drainage system in the treated areas, reducing swelling and associated pain. Additionally, the treatments have beneficial effects on the nerve cells by blocking pain signal transmissions to the brain, thus decreasing nerve sensitivity. The increased production of pain killing chemicals like endorphins and other natural pain relievers from the brain and glands like the pituitary, cause analgesia and a sense of well-being.

Immunity and Antibodies
Photobiostimulation by LED therapy in the discussed frequencies directly affects antibodies, and lymphocytes used by the immune system to identify and neutralize foreign objects (bacteria, viruses, etc.). When a Chromophore, a region(s) in a molecule where certain wavelengths of light are absorbed by exciting an electron from its ground state into an excited state, the molecule “hosting” antibody becomes active and ready to bind to foreign molecules, proteins to render them harmless. Another effect of near-infrared light treatment is the activation of ATP production, the major “fuel” for most chemical reaction in cells.

What is LED Technology

Read Studies and Articles about LED Light Therapy
We use cookies to ensure that we give you the best experience on our website. If you continue to use this site we will assume that you are happy with it.
OKPrivacy Policy
Manage consent